What Did You Expect?

It’s that time of year again. While you are developing plans and budgets for next year’s portfolio of IT projects, most consulting firms are scrambling to update their statements of work to on ensure their consultants continue to be staffed for another year. Before you sign away a hefty percentage of next year’s budget to the same partners and vendors, it’s a good idea to a year end audit to answer a fundamental question, “What did you expect from your IT consultant and did your consultant deliver on those expectations?”

What Does a Consulting Audit Include
The first step in performing a Year-End Consultant Audit is to review the consultant’s performance. That is, you need to determine whether the consultant(s) delivered the benefits, met the objectives, operated within the scope, and produced the expected deliverables on time, within budget and using the allocated resources. The audit also needs to determine whether the consultant conformed to the requirements specified in the Project Charter or Statement of Work. It should also identify the key consultant achievements, failures and any lessons learned for future projects.

The following are key components of a Year-End Consulting Audit:

Expected Benefits
Determine whether the consultant has delivered the business benefits specified in the Business Case (or Statement of Work) of the project.

Objectives
Identify the extent to which the consultant has achieved the objectives specified in the Project Charter.

Deliverables
List the deliverables and quality targets defined in the Statement of Work and rate the overall level of achievement.

Lessons Learned
Describe the lessons learned from undertaking this project and list any recommendations for similar projects in the future.

Schedule
Identify the actual vs. the planned delivery schedule.

Expenses
Identify any deviations between the budgeted project expenditure 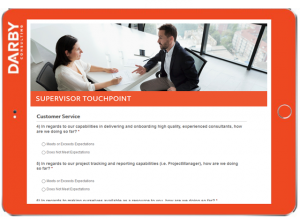 Video: How to Implement Projects Successfully as a Leader

To learn more about Darby Consulting, visit us online at www.darbyconsulting.com.

How can we support your IT projects?